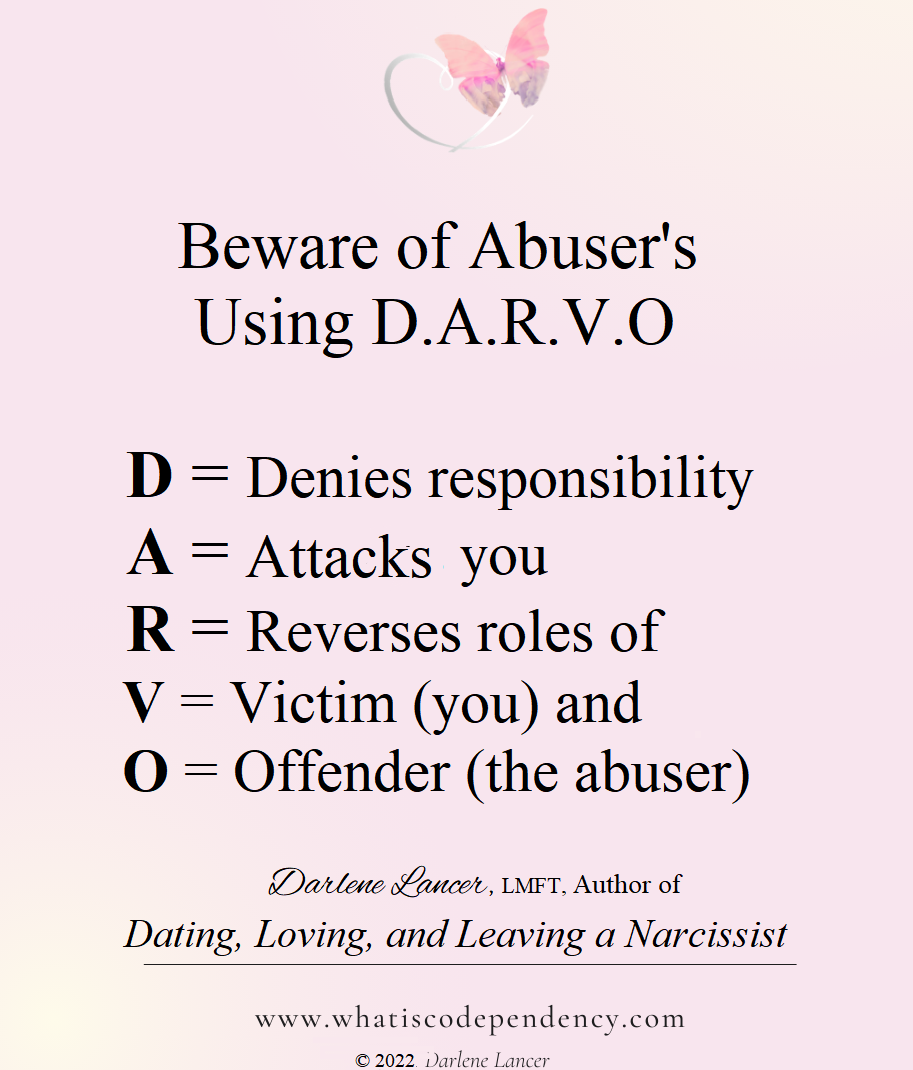 Abusers are long known for victim-blaming, because they never want to take responsibility. More recently a research psychologist Jennifer Joy Freyd gave this a name: DARVO, which stands for Deny, Attack, Reverse Victim and Offender.

This is more than either “playing the victim” or victim-blaming, which we’re all capable of when conversations are misunderstood or not heard or remembered.

Examples might be when we deny responsibility for not picking up groceries and blame our partner for not asking us to get them; or, I lost my temper because you insulted my mother.

Narcissists are experts “playing the victim” plus victim-blaming and projecting traits and responsibility onto other people.

I once remarked to a violent narcissist who blamed his wife for his behavior: “I’m surprised to hear your wife has that much power over you.” He was dumbfounded since his whole agenda was to gain power over her.

DARVO applies to abuse, but goes further. It involves a conscious manipulation where the abuser, often a narcissist, pretends that their abuse never took place and attacks the victim for trying to hold them accountable. Manipulators deny the abuse ever took place, attack you when you try to hold them accountable, and then claim that they’re the victim, thus reversing the reality of the abuser and victim. For example, if you uncover your partner’s flirtatious text, they might deny its significance, act outraged, and attack you for looking at their phone. They may even add, “You’re the one having an affair. By blaming the victim a narcissist avoids being held accountable and is free to carry on; while you, the real victim, feel guilty for spying, thus undercutting your justified anger.

In 1994, Freyd coined the term, Betrayal Trauma Theory to address trauma by a perpetrator on someone who trusts them in a close relationship, such as a child or partner. The victim goes into denial about traumatic experiences in order to maintain the relationship with the abuser whom they depend on. Her research explored why although about one-fourth of girls are sexually abused, statistically, about 8% of women have memory failure of childhood sexual abuse. She observes that when the abuse and accusation are true, the denial, unlike in other cases, is more indignant, self-righteous, and manipulative. In fact, the more one tries to hold these offenders responsible, the more vociferous are their denials and attacks, completely distorting and reversing reality.

She compares it to behavior of a bully when confronted, who seeks to terrify and ruin the victim and chill accusations. The offensive campaign often involves threatening lawsuits and defaming, smearing, and shaming the victim personally rather than focusing on the issues at hand. The abuser may flip rapidly between both attacking and acting victimized.

Another strategy to confuse and discourage victims is to use the lack of legal culpability to mean not only exoneration, but to deny that the events ever took place and prove the abuser’s innocence in fact. In other words, “I’m innocent until proven guilty. Since you haven’t proven me guilty, I’m in fact (in contrast with ‘in law’) innocent. I didn’t do it.

During an interview with Gayle King on CBS, R Kelly demonstrated DARVO. He maintained his innocence, denied abusing women and having sex with underage girls, attacked his accusers as liars trying to ruin his career, and then complained he was victimized because of his “big heart.” Testimony of multiple victims subsequently led to a guilty verdict.

It’s best not to defend or argue, which undercuts the abuser’s responsibility, because then you’re in a debate about what you know happened. Read what JADE stands for. Instead, keep your composure like Gayle King and calmly set a boundary, such as, “You know what you did. I’m not responsible for your behavior,” and walk away.

Learn more about how to handle abuse and narcissists in my book, Dating, Loving, and Leaving a Narcissist: Essential Tools for Improving or Leaving Narcissistic and Abusive Relationships. Study my class, How to Be Assertive.