How to Spot Someone Playing the Victim 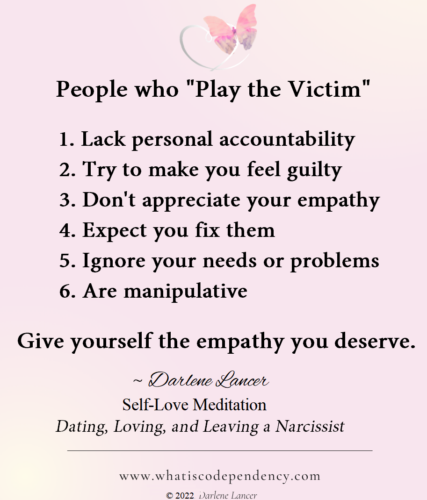 Not all victims are manipulative. Feeling like a victim has taken on negative connotations, but there are people who “play the victim” in order to manipulate you. This is a favorite defense of narcissists and other personality-disordered people. In some other instances, this behavior is learned as a child as a way to get needs met. I refer to them here as “actors.” Sometimes, actors act consciously, but more often it’s unconscious and automatic, like most of our defense mechanisms.

Codependents and empaths with poor personal boundaries are easily manipulated and can end up in long-term narcissistic relationships or with someone who uses this tactic. They suffer from guilt and blame, hurt and resentment that their needs and feelings aren’t being considered.

Here are some signs you’re being played by an actor:

Playing the victim is only one of many defenses and tactics that abusers and narcissists use. There are many ways to manipulate. Learn to spot them all and how to respond effectively in Dating, Loving, and Leaving a Narcissist: Essential Tools for Improving or Leaving Narcissistic and Abusive Relationships.

Start giving yourself the empathy you deserve, and set boundaries with manipulators.