Is Your Guilt True or False? 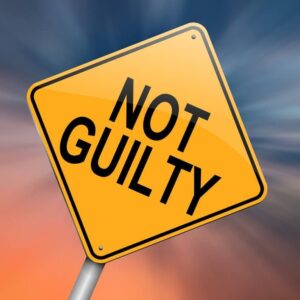 We all experience guilt from time to time. But many of us have a hard time overcoming guilt and find it difficult to forgive ourselves, even though we may readily forgive others. First of all, it’s important to recognize whether our guilt is true or false. Just because we feel guilty, that doesn’t mean we are. Feelings aren’t facts. And even if our guilt is “true”–that we’ve morally transgressed, we’re still worthy and capable of forgiveness.

Codependents have underlying internalized shame, which fosters a guilty conscience. They’re especially hard on themselves and may suffer from frequent bouts of unrelenting, false guilt.

Codependents, in particular, are easy targets of manipulation and projection of blame from other people that they willingly accept. Many codependents are or were victims of abuse in the past, and the role of victim is familiar and more comfortable than standing up for themselves. In their mind, doing so might risk the other person’s anger or worse, the end of a relationship. They rather take the blame and feel guilty. Thus, they’re always saying “I’m sorry” to keep the peace, but don’t really mean it. Moreover, they’ve learned to abuse themselves with negative inner talk. (To overcome this, see 10 Steps to Self-Esteem-The Ultimate Guide to Stop Self-Criticism.

Codependents feel guilty for not giving or doing enough–not measuring up to their perfectionistic, unrealistic ideals. They feel guilty for their negative feelings and thoughts–sometimes including lustful thoughts and feelings. Moral perfectionism, which may have been instilled by religious shaming, can make people unhealthily obsessive about monitoring their thoughts and feelings. Many codependents idealize love and kindness and attempt to disavow and suppress their anger and unpleasant feelings. The more they try to suppress them the more self-loathing and negative feelings they create.

Another source of false guilt is the habit of feeling responsible for others. They feel guilty for the feelings and thoughts of others –things beyond their control. Codependents take this to an extreme and even feel guilty for others’ actions and behaviors. It’s common for abusers to blame their actions on their victims and for addicts to blame their addiction on their partners, who in both cases accept it as true. Narcissists and borderline personalities typically use projection of blame and criticism to shift responsibility and get their needs met. (See my blog on manipulation and emotional blackmail.) However, codependents can feel guilty without being blamed. They deny their needs and wants and put those of others first. The result is that they take on responsibilities that belong to others and feel guilty saying “no.”

When guilt is false, it’s an unhealthy symptom of shame. We blame ourselves and feel irredeemable. We’re more focused on ourselves and what people think of us than our concern for them. On the other hand, with true guilt, our focus is on the other person–how we’ve harmed them. We’re motivated to make amends and change our behavior in the future.

All religions encourage making amends in order to purge guilt and help repair relationships. The Twelve Steps of Alcoholics Anonymous and Codependents Anonymous also suggest making direct amends wherever possible. (For a detailed explanation with exercises of how to use Twelve Steps, see my ebook, Spiritual Transformation in the Twelve Steps)

Self-forgiveness starts with self-acceptance and humility. The opposite, ruminating or beating ourselves up, isn’t at all helpful in alleviating guilt. It just makes us feel worse about ourselves, while self-forgiveness builds our self-esteem. On the other hand, denying, rationalizing, or excusing our guilt doesn’t make it go away. We can push our feelings into our unconscious and in their place create irritability or resentment and anger toward the person we believe we’ve harmed. The most productive and effective course is to face reality, and then take specific steps to understand, analyze, and forgive ourselves. As we accept ourselves, we grow in self-compassion.

Freedom from Guilt and Blame – Finding Self-Forgiveness is an e-workbook designed to free you from guilt’s grip. It provides a step-by-step process to overcome guilt and find self-compassion by means of three different methods: cognitive, self-compassion, and spiritual, using practical techniques and exercises. You’ll be able to sort out guilt from other emotions and discover whether your guilt is true or false, healthy or unhealthy. You’ll also uncover the impact and connection between your values, perfectionism, and codependency and guilt, and learn what to do.

Overcoming Guilt – Is Your Guilt True or False? by Darlene Lancer, MFT, a Licensed Marriage and Family Therapist in Santa Monica, CA, and author of Codependency for Dummies

Rationalization is different from self-analysis. The former is a type of denial, explained in my blog on denial and in Codependency for Dummies The latter should lead to any prolonged guilt, which reflects a guilty conscience and internalized shame. Finally, it may be difficult to see ourselves clearly, which is one of the benefits of both sponsorship in a 12-Step program and therapy. This is particularly true when we have a harsh or ever-present internal critic that stems from internalized shame.

Fantastic website and great knowledge! Keep up the great work