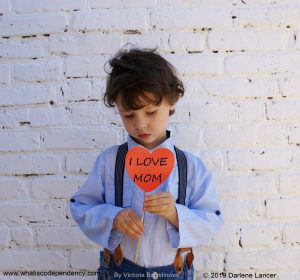 All children of narcissists suffer. Sons of narcissistic mothers suffer damage to their autonomy, self-worth, and future relationships with women.

Narcissists lack empathy and the ability to nurture their children. They don’t see them as individuals, but only as extensions of themselves. Their children’s feelings and needs are neglected and criticized, while their own take precedence. Narcissists feel entitled and insist on getting their way. They exact compliance through control, manipulation, guilt, and shame.

“It’s their way or the highway,” and if you don’t oblige, they punish you with attacks, coldness, or withholding. Their insecurity drives their insatiable, unrealistic needs for high regard and admiration. They take offense easily, triggering contempt and rage. Because they lack boundaries, they project and shame and blame others for their own emotional discomfort, which they can’t tolerate.

Dynamics between Sons and Narcissistic Mothers

Narcissism varies in degree and kind and with each individual’s personality and values. There are narcissistic mothers who are disinterested in their children; others who are over-involved. Some act aggressive, while others act caring or seductive. The following are some common patterns, though your experience may differ.

Narcissistic mothers who feel burdened by motherhood neglect their children, yet shame and criticize them – sometimes for being too needy or childlike. They are needy themselves and can’t bear their child’s needs. They might demand that their young son “be a man,” or favor one child and demonstrably ignore or belittle another.

Instead of neglect, other narcissistic mothers are enmeshed. They use their children for their narcissistic supply. Although a mother may appear independent, she may be emotionally needy and foster mutual dependency with her son through adoring and controlling behavior. She might depend on her son to support her emotionally, listen to her, be a companion, or attend to her physical needs and responsibilities. When he’s an adult, she might rely on him to make decisions and manage her affairs and finances.

Above all, she uses and exploits her son to supply her with attention and admiration, and to fill her wants and needs. She makes him feel loved, important, and valued, reinforcing his dependency. However, it’s only at her pleasure. Hence, her over-involvement with her son can camouflage her toxic parenting. There’s usually a high price to pay for his attempts at autonomy. Through her manipulation with anger, shame, guilt, self-pity, and/or martyrdom, he learns to put her wishes and needs first and feels obligated to do so.

Many narcissistic mothers idealize their young sons. They build his confidence and sense of importance. As he matures and challenges her control, she disparages his emerging individuality and tries to correct and change him. To boost her ego, she may brag about her son to her friends, but is critical at home. In response, he may rebel and incur her rage or try to please her to be accepted. His fall from grace can be confusing and traumatic. It’s exacerbated if another child is born. He loses his specialness, and sibling rivalry can be extreme.

Due to her personality disorder, her marital relations lack intimacy. Her husband may avoid her with work. To compensate, and because she’s emotionally needy, she will “triangulate” (bring in a third), be it work, a lover, an addiction, or her children for her narcissistic supply to fill her emptiness. She may use her son as a confidant or companion. Children are ideal subjects because they idealize their parents and can easily be controlled.

It’s worse for a son if his father is absent, rages, is violent, or has a mental or drug problem. Then to survive, the son may seek comfort in addiction or further bond with his mother.

More damaging is the seductive narcissistic mother who sexualizes her relationship with her son. She behaves inappropriately with him in language, appearance, and manner. Her behavior may only amount to emotional incest. But to a boy, she’s titillating and exciting. This over-stimulates his natural Oedipal fantasies and sexual urges (often unconscious) toward his mother. However, if she encourages this or shames him, the Oedipal complex doesn’t get resolved in a healthy way. Ideally, a son represses his Oedipal urges as he observes his parents’ bond. He becomes closer and identifies with his father as a masculine role model. But if the marital relationship is weak and a son overly attaches to his mother, and he never accepts that he can’t have her.

Left unresolved, some sons believe (whether or not accurately) that their mother loves them more than her husband. Instead of surrendering defeat, he’s inflated and victorious over his father. This dynamic damages the son’s adult intimate relationships. It may also impair his self-concept as a man since he sees his father, who should be a positive role model, as failing. The potential for this is exacerbated when the father is absent, or if a divorced mother denigrates and alienates her ex-husband during the Oedipal phase of her son’s development.

Just as daughters of narcissistic mothers experience their mother’s envy and competition, a narcissistic mother may be jealous of her son’s girlfriends and compete with his wife. No one will be good enough, because no one will measure up to her inflated self-image and standards. She must remain number one in his life. She may try to control and undermine his intimate relationships, criticize or disrespect his partner, or do so subtly with innuendo and manipulation. (See the movie Queen Bee.) Her son will feel hopelessly guilt-ridden and caught in the middle, trying to avoid hurting and angering his mother and partner (who may also be a narcissist or otherwise mentally unstable.) He feels guilty, is unaware of appropriate boundaries, and is unable to set them.

The Damage to Sons of Narcissistic Mothers

Like sons of narcissistic fathers, sons of narcissistic mothers don’t feel loved for who they are, but only for what they can do for their parent’s approval. Because appearances are all important, their children must look and act in ways that reflect positively on them. Love, if given at all, is conditional. It’s not based on understanding, appreciating, and accepting their son’s unique, true self. The son’s value depends on the extent to which he aggrandizes his parents’ ideals and ego. This may include pressuring him into a parent’s favored profession and to achieve success or the lifestyle his parents want.

Whether or not sons have worldly success, they grow up insecure and codependent. Their individual identity has never been supported. Their self-worth and self-esteem have been undermined by verbal abuse and lack of love for their authentic self. They learned to accommodate their mother by suppressing their needs, feelings, and wants. This denial handicaps them in adult relationships. They have difficulty identifying and expressing their needs and feelings. They may self-sacrifice and feel undeserving without people-pleasing. Where the father was unable to stand up to his wife to protect his children from her control and jabs, he fails to role model setting boundaries. As a result, a son can feel used, resentful, and exploited by women.

When a son feels unsafe to express feelings and needs to his mother, it feels unsafe in adult intimate relationships, as well. Having been manipulated and emotionally abandoned, he fears being judged and/or abandoned by his partner. Additionally, having been enmeshed with his mother, he fears being engulfed and controlled by an intimate partner. Thus, he’ll avoid intimacy, prompting his partner to demand more closeness, which escalates his apprehension and defenses. (See “The Dance of Intimacy.”)

From feeling controlled and/or exploited, the son may harbor deep dislike toward his mother, even if he remains close. This often extends to other women. Generally, he will react to a woman with compliance, resistance, or anger. Some men will be aggressive and distrust women. Other men have learned to be manipulative or be passive-aggressive. They overly accommodate, lie, or passively refuse simple requests from their partner as if they were their mother’s demands. Their hostile behavior may eventually make their spouse act like their mother! Resentment and intimacy fears might drive them to be dishonest or unfaithful, especially if their father was.

Other sons may repeat their maternal relationship with women who are demanding, controlling, or abusive. They may partner with an older woman, a narcissist, addict, or someone with borderline personality disorder or other mental problems. They may become caretakers to their partner, just as they were to their mother and find it hard to leave.

To heal, a son must come to terms with his mother’s mental illness, his anger toward her, and his grief. Eventually, he needs to accept his parents with compassion, whether or not he likes or loves them. At the same time, he must recognize that he’s worthy of love, learn to set boundaries with his mother and others, and to value and express his needs and feelings. This is part of recovering from shame and codependency, as explained in Conquering Shame and Codependency. To deal with a narcissistic mother, see Dating, Loving, and Leaving a Narcissist: Essential Tools for Improving or Leaving Narcissistic and Abusive Relationships.

Thank you so much for writing this article. I have since been out of contact with my mother for 7 years and my life is a lot healthier. It took a long time for me to not be angry with her and forgive her but to see her again brings back the fear of me regressing. Thankfully I am in a happy and healthy relationship with my partner and we communicate very well and we truly work as a team.

[…] and expected her child to be independent before it was emotionally mature enough to do so. (See Sons and Daughters of Narcissistic […]

My fiancé cancelled our wedding a few hrs before the ceremony bc his mother made him after a fight. She acted like I didn’t exist. It hurt me so badly but rather than communicate in a healthy manner, I became frustrated with him as he did nothing to help me develop a relationship w/her & set boundaries w/her. I’m so hurt & have been going to therapy & take responsibility for mistakes. I started to become an angry person, which I never was. She made me feel worthless & crazy. I also stopped taking my antidepressants which was a huge mistake. I regret everything and wish he’d speak to me bc I love him for him & don’t want to be like her.

You might want to read “Sons of Narcissistic Mothers.” Consider that you learned how weak he is and how meddling she is before you were married and suffered that for much longer. Do work on becoming more assertive rather than aggressive. Study and do the exercises in my book How To Speak Your Mind – Become Assertive and Set Limits and webinar How to Be Assertive

This helps so much because I realize there are others who had worse experiences than me – I managed to convince myself ‘all was well’ until later in life when some of these symptoms/consequences manifested. It all takes work though.