Beware of the Dark Triad 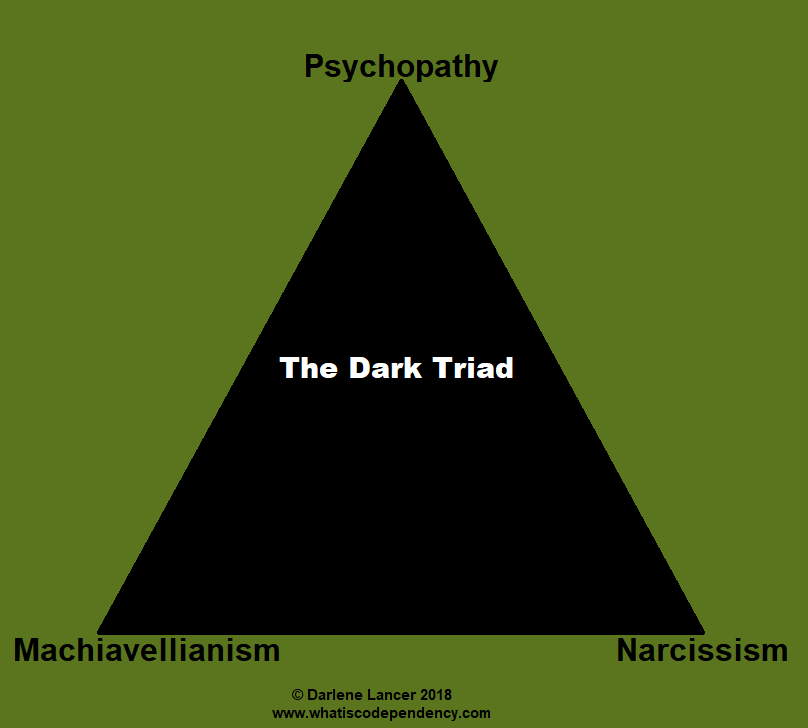 Think of the Dark Triad of Narcissism, Psychopathy, and Machiavellianism as the Bermuda Triangle – it’s perilous to get near it! The traits of all three often overlap and create personality profiles that are damaging and toxic, especially when it comes to intimate relationships, where we let our guard down.

One woman was the subject of identity fraud. Her bank accounts and credit cards were compromised.  She regularly spoke to the FBI and suffered extreme anxiety and emotional stress. The authorities were unsuccessful in finding the culprit.

At the time, she was in love with her fiancé who lived in her apartment. He was very supportive in doing research to try to find him. He comforted her, occasionally bought her gifts, and paid her monthly rent out of money she gave him. When eventually the landlord confronted her about months of delinquency, she realized that the criminal was, in fact, her own boyfriend, who had been pocketing her rent money, except to buy her gifts. Her denial made it difficult to accept the truth about his ruthless gaslighting.

What is the Dark Triad

This popular term was coined in 2002 by Paulhus and Williams. Dark Triad refers to three unusually negative personality traits—narcissism, psychopathy, and Machiavellianism. The latter two share more traits with each other than with narcissists. Generally, the term refers to individuals with “subclinical” symptoms, meaning that they may not necessarily fully have a narcissistic personality disorder (NPD) or anti-social personality disorder (ASPD). Machiavellianism arose out of Machiavelli’s philosophy and is not a mental health disorder.

Recent comparative research on the Dark Triad has attempted to analyze differences among these three malevolent personalities. To varying degrees, all act aggressively out of self-interest and lack empathy and remorse. They’re skilled at manipulation and exploit and deceive others, though their motivations and tactics vary. They violate social norms and moral values and lie, deceive, cheat, steal, and bully. It’s thought that genetic factors underlie their personality.

Machiavellianism and psychopathy are more closely correlated due to their malicious behavior; whereas narcissists are defensive and more fragile. This is because their grandiosity and arrogance is a façade for deeper feelings of inadequacy. (See “Relationships with Narcissists.”) Men outnumber women, primarily when psychopathic traits were measured (i.e., not just deceit, manipulation, etc.) This difference is linked to the overt antisocial behavior associated with psychopathy, suggesting that it may be due to biological factors, such as testosterone, and social norms.

All three types (narcissism to a lesser degree) scored low on agreeableness, measured by the Big Five personality test that assesses extraversion, neuroticism, agreeableness, conscientiousness, and openness. Agreeableness differs from charm and charisma. It involves trustworthiness, unselfishness, straightforwardness, compliance, kindness, and modesty, which are essential for good relationships.

Machiavellians and psychopaths are more lacking in conscientiousness. (Why work when you can cheat and steal!) Psychopaths have the lowest level of neuroticism or negative emotions, which makes them the most sinister. Predictably, narcissists scored higher on openness and are much more extroverted. Openness correlates with evidence that narcissists tend to be creative.

All three personalities lack honesty and humility, which includes sincerity, faithfulness, lack of greed, and fairness. A study of cheating revealed that all three cheat when the risk of getting caught is low. When the risk is high, psychopaths and Machiavellians (when their energy for thinking is low) cheat. Both will intentionally lie. Narcissists have high levels of self-deception rather than intentional dishonesty.

Machiavellians and psychopaths scored higher in these psychosocial issues; psychopaths twice as high as narcissists. The highest scores were among psychopaths, with aggression being the highest trait. Narcissists scored in the categories of aggression, sexual issues, interpersonal difficulties, and antisocial tactics. Among all three personalities, most of the high scores were due to psychopathic traits. When those were controlled (removed), narcissism still accounted for interpersonal difficulties.

To further understand the lack of empathy among the Dark Triad personalities, research examined affective empathy, which is the ability to have an appropriate emotional response to others’ emotions, and cognitive empathy, the ability to discern others’ emotional states. They found that all three personality types lacked affective empathy, but had unimpaired cognitive empathy. Creepily, all three felt positive looking at sad faces and psychopaths felt negative seeing happy faces but liked seeing fearful faces!

Overall empathy was lowest among psychopaths and Machiavellians, and study participants who were high on any of the three personality profiles had the lowest affective empathy. Narcissists scored highest on cognitive empathy. The fact that these people are insensitive to other’s feelings while retaining the ability to assess others’ emotions, allows them to strategically manipulate people and ignore the harm they inflict.

To find out if you or someone you know may qualify, see the Dark Triad test.

If you think you may be involved with a Dark Triad personality, seek psychotherapy. Don’t be afraid to talk to others about your experience. Covering up bad behavior is a common, but dangerous form of denial. Learn about narcissistic abuse, subtle forms of abuse, abusive relationships, and narcissistic relationships. Find out How to Be Assertive and read Dating, Loving, and Leaving a Narcissist: Essential Tools for Improving or Leaving Narcissistic and Abusive Relationships. Violence is preceded by emotional abuse. If you’ve been threatened with violence, don’t wait for it to happen or trust that it won’t be repeated!

Muris, P., Merckelbach, H., Otgaar, H., & Meijer, E. (2017). The malevolent side of human nature: A meta-analysis and critical review of the literature on the dark triad (narcissism, Machiavellianism, and psychopathy). Perspectives on Psychological Science, 12 (2), pp. 183-204. Retrieved from http://public.psych.iastate.edu/caa/Classes/Readings/17DarkTriadMeta.pdf

My ex gf is texting me telling me shes going to text my kids mom and spread rumours about me. She said it makes her feel good to know it makes me miserable. I tried to let her down easy but she is possessive and even after declaring were friends, she kept messaging me how she misses me . I didnt fall into the trap and now she is seeking to harm my relationship with my kids mum. What kind of person is this and how should I disarm them??

This type of person needs firm boundaries with consequences. See my blogs on “Do’s and Don’ts of Confronting Abuse,” and “10 Reasons Boundaries Don’t Work.” You can also consider a restraining order.