How to Tell if You’re Willful or Strong Willed 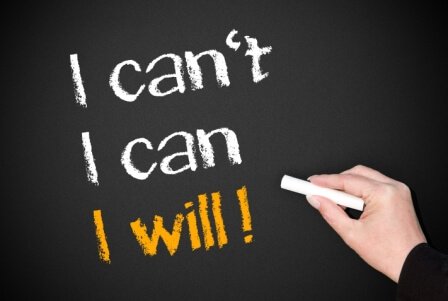 Strong-willed people are successful, yet those who are willful often sabotage success.  Willful individuals can be fiercely stubborn in their opinions and pursuit of their goals, ignoring what other people think and need. They often fiercely force their will despite obstacles or negative implications. Their behavior has obsessive and compulsive qualities in that they’re unable to let go and is an obstacle to overcoming codependency and addiction.

In contrast, a strong-minded person accepts life on life’s terms, which provides a solid basis for constructive, effective action that is well-considered and not compulsive.

One of the early authors on codependency, Psychiatrist Timmen Cermak, believed that codependents and addicts “control their lives by sheer force of will.” The book Alcoholics Anonymous attributes the phrase “self-will run riot” to selfishness, “driven by fear, self-delusion, self-seeking, and self-pity.” When we’re motivated by self-will, we may deny reality and sound advice and manipulate people and facts to achieve our goal. We’re willing to take risks that may provoke retaliation or jeopardize job security, peace of mind, and relationships. Some addicts, narcissists, or sociopaths lie, exploit others, and act unethically or illegally to achieve their goals.

Control is a primary symptom of codependency of addiction and codependency. Codependents have a dysfunctional relationship with their will. Sometimes, we’re passive and don’t exercise it effectively. Some of us have never learned to assert our wants and needs or make decisions. Instead, we don’t act or relinquish control and defer to others.

Other times, we attempt to force our will on people and situations over which we’re powerless. We have difficulty accepting reality and believe that things should be different. Our denial leads to anger and resentment. We become easily frustrated when things don’t go as we expect or when people don’t behave the way we think they should. There is a certain amount of pride and arrogance in this assumption. Psychiatrist Abraham Twerski adds that the addictive thinking that underlies controlling behavior exemplifies “a delusion of omnipotence.”

Because we lack a sense of power in our lives, we instead try to manipulate and control the lives of others. Rather than take responsibility for our own happiness, which would be empowering, our attention is external and focused on changing others and forcing solutions. We haven’t learned to attend to our needs directly and assertively, so instead we try to control others in order to feel okay. We think, “I’ll change him (or her) to do what I want, and then I’ll be happy.” This behavior is based on the erroneous beliefs that we can change others and that our happiness depends on them. But when our expectations aren’t met, we feel more helpless and powerless.

In trying to change things we can’t, we’re exerting fruitless efforts in unproductive ways, often creating more problems and feelings of hopelessness and victimization. It’s hard enough to change ourselves! The first step of Alcoholics Anonymous, Al-Anon, and Codependents Anonymous addresses control, suggesting that we admit our powerlessness over things we can’t control.

The Cause of Willfulness

Codependents generally grow up in families where power was exercised over them in a dominant-submissive pattern. When personal power and self-worth aren’t encouraged, we come to believe that we have none. We’re afraid of our own power and that it will alienate other people. To feel safe and loved, we learn to accommodate and people-please. Repeating this pattern in adult relationships can lead to unhappiness and being abused or exploited.

On the other hand, some children decide the best way to feel safe and get their needs met is to wield power. They’re rebellious or aggressively seek power over others. In hierarchical families, children also mimic controlling parents by dominating and teasing siblings. They treat others the way that they have been treated. This strategy breeds fear and resentment in relationships and makes other people withdraw or behave in passive-aggressive ways.

Having a strong will is having a strong mind. It is in many ways the opposite of being willful or codependent. Whereas willfulness derives from fear and insecurity, strong-minded people are confident and secure. This fundamental difference explains the ways in which these personality types are dissimilar.

Fear is what makes self-willed people headstrong. They’re so afraid of losing something or someone that they’re driven to control situations. This is also why they ignore wise advice, critical feedback, or contrary facts that threaten their shaky self-esteem or present obstacles to achieving their objective.

Some willful people refute all authority and stop at nothing to get their way. Their tactics may vary from manipulation to criminality. They believe that they’re right and strive to attain their goals, but their thinking and insecurities limit them. Fearing failure, they procrastinate and become paralyzed by seeking perfection and focusing on limitations and obstacles. They may deny their fear and impulsively take unwarranted risks, or be risk-averse and unwilling to try new things. They can be so compulsively single-minded that they’re blind to alternate solutions and new opportunities as well as potential adverse consequences.

Willful people are uncompromising negotiators who insist on winning every point. They can nag and argue relentlessly in an attempt to persuade the unpersuadable. They can lose their perspective and overlook important aspects of a deal. They may prevail, but lose opportunities, relationships, and their reputation. In the long run, a cooperative, working partnership in an ongoing venture is far more valuable.

Fear makes people behave compulsively and unable to be flexible and let go. Their anxiety can cause them to overthink things, get easily distracted, and avoid taking action and making decisions by procrastinating or wasting time with nonproductive busy work.

In contrast, strong-willed people are confident and have nothing to prove. They’re clear about their purpose and goals and prioritize their time and activities.  They’re decisive risk-takers and don’t delay, seek validation, or wait for permission. Consequently, they’re uninhibited by fear of failure, disapproval, or rejection. Unafraid, they’re willing to take the initiative. They don’t mind being different or making mistakes. Rather than fearing the shame that failure might cause, they evaluate and learn from their missteps. Their confidence also makes them unafraid to experiment and think outside the box. For example, because they’re open-minded and not compulsive, they’re able to allow their imagination to present new directions and creative solutions,

They’re execution-oriented and focus on solutions and getting things done. Like the Serenity Prayer suggests, they accept what they cannot change and have the courage to change what they can. Thus, they compromise when necessary in order to move projects forward. Confidence keeps their ego at bay, so that they’re willing to learn, and adapt.  They seek cooperation and to influence others, but they don’t waste time trying to control or argue with resistant people.

It’s a fact that successful people say “no” a lot. They value their time spent with others and with themselves. As a result, strong-willed people are clear about their boundaries with themselves and with other people. Their energy is focused and purposeful. They have the persistence and self-discipline to accomplish their goals, whether it’s learning a new skill, cleaning out the garage, or building a business. Their strong will enables them to have patience, presence, and an ability to defer gratification. They don’t waste time with self-defeating habits or addictive behavior.

Strong-minded people don’t lose sight of the bigger picture, including the moral dimensions. Firm boundaries protect their values and integrity. They don’t tolerate bad behavior in other people out of fear.  They’re steadfast about what’s important to them, but also flexible and able to listen and ask questions.

Healing codependency and becoming more independent develops our will, which to a large part is disabled by shame that breeds insecurity, fear, and anxiety. Conquering Shame and Raising Your Self-Esteem empower you with resilience and confidence.

This article gives me the feeling that if you’re willful it’s a huge defect but if you’re strong willed you have all your s*** together. It sounds like it’s all black & white. I feel many people have both of those qualities. Plus who sets these weird ass rules that if you’re this way, THEN you’ll be productive. I’ve known many self willed people (mind you this is just my experience) but even your explanation sounds like it. Self willed means you of course have boundaries, manage time are efficient, say no etc..So in essence you do whatever you have to make yourself happy. Life doesn’t work like that for most of us. Especially in addiction. You are probably going to have to go help someone or be in situations that aren’t comfortable. Although you may want to say no, your empathy & understanding of people guide your decision to be there. This article rubbed me wrong & it could just be me..For that I apologize. God Bless

Perhaps it’s a misunderstanding in terminology. It’s not that wilful people don’t have boundaries or aren’t efficient. But my point was that at times they can be stubborn and get in their own way.

Brilliant article!! I have seen so many of my old traits here. It has been a painful but rewarding journey for me. Thank you for sharing.