Steps to Be Empowered and Not a Victim 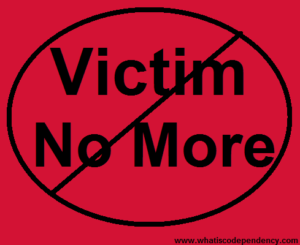 Decades ago, when I heard people say they were no longer a victim, I had no idea what they meant. A victim is defined as an individual who has been fooled, hurt, or harmed, due to his or her emotions or ignorance, an unfortunate event, or the actions of someone who deceived, cheated, injured, or killed him or her.

At the time, I really was a victim in a relationship where I experienced systematic, emotional abuse. But due to my ignorance, I didn’t know it.

Many people, particularly codependents, are in relationships with addicts or abusers, including relationships with partners or parents who have a mental illness, such as a bipolar mood disorder or borderline, sociopathic, or narcissistic personality disorders. They suffer from frequent and often malicious verbal and sometimes physical attacks, betrayal, manipulation, and other forms of abuse that can alter their perception, self-image, and ability to protect themselves.

Many victims in abusive relationships don’t recognize it as such, because it’s reminiscent of the shame, neglect, or another mistreatment they experienced in their families of origin. As children they were unprotected victims; hence, they didn’t develop adequate self-worth or learn how to stand up to abuse.

No Victims, Only Volunteers

In recovery circles, being a “victim” is frowned upon. There’s a saying in Al-Anon Family Groups: “There are no victims, only volunteers” – meaning that when you tolerate unacceptable behavior, you volunteer for it. Learning that I was being verbally abused was enlightening. Before that, I brushed off painful epithets and criticisms by rationalizing and minimizing them. This is called denial. Once I faced the truth in an assertiveness class, I found the words and courage to name the abuse and say how I felt about it. To my surprise, the verbal abuse stopped, with only an occasional slip-up. I learned to disengage and walk away from potential attacks before they escalated. I was becoming empowered, and no longer behaving like a victim. This process took time.

There are other forms of “playing the victim,” such as blaming your unhappiness on your job or inaction on physical or emotional circumstances. The common denominator is putting the responsibility for your circumstances outside of yourself or beyond your power. Someone else or some circumstance is preventing you from achieving what you want.

Learning the Role of Victim

Contrary to the Al-Anon slogan, being a victim isn’t a role anyone wants or consciously chooses. No one enjoys feeling powerless and hopeless. There are unconscious forces at work that usually are determined by beliefs learned early in life. For example, if we have a shamed-based self-concept that we’re a failure or unworthy of happiness, we’ll likely prevent ourselves from achieving success or happiness, no matter how hard we try.

These beliefs are usually learned growing up in a dysfunctional family. Abusive relationships are closed systems. Often abusers try to exercise exclusive control over their partner with direct threats or through subtle manipulation, such as guilt or undermining, in order to keep their partner from talking to others or receiving outside information and help. Parents do this, too, to hide their shame and keep up appearances, using overt threats of punishment if the abuse is recounted to others, or with sayings, like, “We don’t share our dirty laundry,” and “Blood is thicker than water.” Victims may not know that there’s help or how to access it and may fear for their life or loved ones if it’s reported.  Using the children to blackmail a spouse is not uncommon.

Becoming empowered and leaving victimhood behind is difficult and extremely hard to do on our own. We’re all too used to our own perspective and repetitious thought patterns that go unchallenged until we talk to someone with a different, healthier perspective.

For example, I felt trapped when I was verbally abused while riding in the car. I’d never considered getting out of the car until my Al-Anon sponsor made the suggestion. When I did, I couldn’t believe the immediate, exhilarating, empowering, and liberating high I felt. Had I not discussed the problem with her beforehand, that action never would have occurred to me. I started driving separately in my own car to events. This way, I could leave when I wanted, avoid abusive conversations, and not worry about my partner’s sobriety. By learning to speak up and set boundaries, I was becoming empowered and was no longer a victim to someone else’s mood or behavior.

Whether you really are a victim in an abusive relationship or see yourself as one in your life, the solution is the same. These are suggested steps to achieving this freedom, not necessarily in the following order:

#3 made me think of an issue that I do not know how to handle. If the undesirable behavior is someone having verbal tantrums on a daily basis and making sure I can hear it from my bedroom, what action can I take to stop it? This is an adult with a short fuse who blames me for her life choices so if she stubs a toe or has to make her own coffee, she screams profanity loudly to make sure I hear her hatred. How would you shut down a daily adult temper tantrum? It happens about 10 times a day because she really resents doing things for herself. I try to not react but it makes me feel wronged and depressed.

It sounds like you’re dealing with someone immature with severe emotional problems. You need to start setting attend CoDA, boundaries with consequences, and get some counseling. Do the steps in Dealing with a Narcissist.

I really need to empower myself to become more assertive because all I want to do is run back to him, for what though?!

Love this blog. I have been on antidepressents for years. and for years I played the victim. 15 years ago I had a drug problem. I went to treatment then joined NA. I did the work, the 4th step, made my amends, wrote my parents a letter, made myself accountable for my actions, my mistakes, etc… I focused on not relapsing, not realizing all the while that I was full of shame, still masking, still attaching myself to the wrong men , still walking with shame, low self esteem, never feeling good enough, a suicide attempt, which landed me on the mental ward.. I have felt I am crazy until I started understanding what co dependency is.