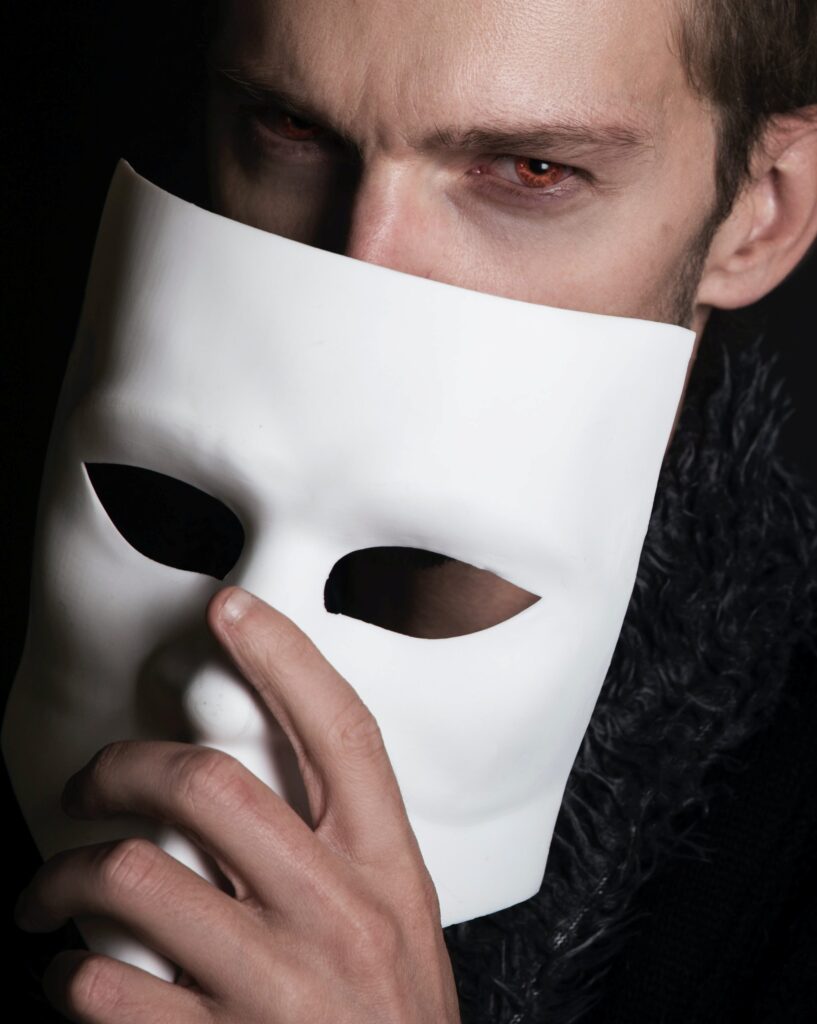 You won’t guess abusers’ dirty little secret – the one thing narcissists and abusers don’t want you to know. In fact, they find it so shameful that most of them won’t admit it even to themselves. They hide it behind their abuse and bluster, their braggadocio, and their arrogance.

People are fooled by the narcissist’s bold persona. They’re confused by their words and intimidated and shamed by their aggression. They don’t realize that an abuser’s personality is a mask and that their behavior is a smoke and mirror game. It’s manufactured as a defense system to hide a scared, insecure child inside – a child who feels as insignificant as the abuser’s pretense of importance.

Their secret is that they feel insecure and needy. This is why they must at all costs feel powerful and in control. Once you realize this, it explains their entire personality and abuse. They act as if they’re needless and judge their partners for their needs and feelings. Some abusers and narcissists seem quite self-sufficient outside of an intimate relationship.

Yet, they get attention from their work, colleagues, and casual lovers. In a romantic relationship, they insist you meet their relentless demands, sometimes including being left alone.

Narcissists must control other people and their environment, including your beliefs, feelings, and actions so that they will feel safe! They demand, belittle, or manipulate you to put raise themselves and put you down. You end up feeling unsafe, which is what they feel inside. This is a defense called projective identification. Your feelings show you how they really feel and in many cases how they were treated as a child.

Notice that narcissists have to brag, exaggerate, and fantasize about their greatness. They act special, entitled, arrogant, and want to associate with the best and most expensive or well-known. All of these behaviors are methods to raise themselves up to feel less insecure and ashamed of feeling weak and inadequate. If they’re the best, even by association or through buying symbols of luxury, they don’t have to feel small and insignificant.

This also means that they must believe that they’re better than you and anyone else. If even one person excels or is better at something, they must surpass that person. If they’re not on top, in their mind they’re inadequate or a failure. This also accounts for their envy and hatred of people with whom they compete if only in their mind. Some malignant and perfectionistic narcissists will actively take down their competitors and seek revenge for real or imagined wrongs.

Their insecurity also explains why they’re super-sensitive to any slight or imagined criticism. If you disagree, you must be wrong, because they have to be right. They will call you too sensitive, but in fact, it is they who are exquisitely touchy to feedback. When they don’t receive praise, they infer criticism. In addition, they need constant affirmation, praise, loyalty, and approbation to validate that they are the greatest. They constantly need their narcissistic supply because they are so insecure. Because their self-doubt is so great, any praise and attention provide momentary relief but doesn’t stick or mean anything in the long run because inside they feel shame.

It follows from their shame that narcissists cannot accept any responsibility for their words or actions. Because they are so afraid of being judged, they cannot admit any fault or mistake or even ownership of their own words lest they be asked to explain themselves. In their world, things are good or bad, black and white, success or failure. Any error renders them bad, a failure, and unlovable, because they already feel shame and insecurity.

Like a child in trouble, their first defense is denial, which can include conscious lying. Their next defense is to blame you, their boss, the system, or other groups – anyone but themselves. The facts are irrelevant and you waste your time arguing with them. They may even say that you caused them to do something. Ironically, by blaming you, they’re giving away their power. They in effect are saying that you control them. If you point this out, they’ll be shocked.

After denial, projection is their favorite defense. Rather than feeling weak, inferior, unimportant, or any other negative trait, they accuse you and others of being weak, too sensitive, inferior, insignificant, or whatever else they don’t want to feel about themselves. With projection, they’re trying to rid themselves of their dirty little secret and make you and other people the needy ones with all the problems.

Don’t fall for their game. Talk to supportive friends and professionals. Trust your instincts and get more information on narcissism. Get the Narcissist Quit Kit. Read Dating, Loving, and Leaving a Narcissist: Essential Tools for Improving or Leaving Narcissistic and Abusive Relationships.