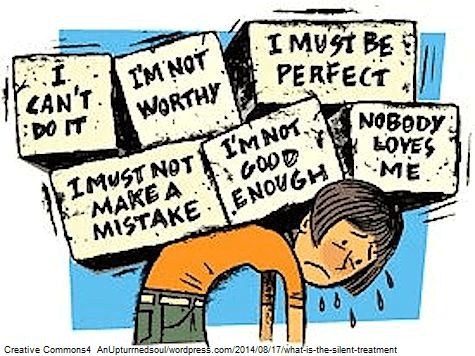 Women are notorious for self-criticism and finding fault with themselves. A Dove Self-Esteem study found that over 40 percent of women are unhappy with their looks. Over two-thirds suffer low confidence about their bodies. Many women blamed the ideal, airbrushed models for setting unattainable standards. Societal attitudes are a major cause. We have the power to change.

Our beliefs and habits that contribute to low self-esteem. If you lived with someone constantly complaining about your cooking, your body, your work performance, your ability as a mother, daughter, wife, lover, home decorator, housekeeper, and on top of that also nagged you to diet and exercise more, read more, maybe even pray or meditate more, you’d know why you were depressed, anxious, and wanted to scream all the time. Maybe you do live with someone like that, YOURSELF.

Universally, women tend to have lower self-esteem than men. However, in industrialized Western countries, the gap is much greater. Due to cultural influences, for women, self-criticism usually focuses on motherhood and our appearance. Men more often judge their strength, virility, and ability to be a provider.

It starts in childhood. Girls’ self-esteem begins to plummet at nine years old, found Dr. Emily Hancock (The Girl Within (Ballentine, 1990). A 1997 Commonwealth Fund survey determined 25 percent of teenage girls didn’t like or hated themselves, compared to 14 percent of males, and 27 percent of the girls had had suicidal thoughts. Girls admitted to being very self-critical, particularly about their looks and weight. (The New York Times, “Women’s Health,” 11/4/1997). Things have gotten worse instead of better. A later survey by Dove reported that seven in ten girls were dissatisfied with their looks and/or their performance in school or in their relationships. Sadly, many engage in self-destructive behavior.

By the time girls mature, they have an eagle eye that notices what’s wrong far more than what’s right. Self-criticism is a major contributor to low self-esteem, and although it hasn’t been shown to cause depression, it’s a symptom of depression and often the cause of feeling down or having the blahs.

Increasingly, since women have had careers, they feel pressured to excel as mothers, wives, homemakers, and as entrepreneurs and professionals. Women more than men expect themselves to be topnotch at everything. In truth, one person can’t. Perfectionists make it doubly hard on themselves. Perhaps, the fact that Western women have greater freedom and opportunities also invites self-judgment. There is also less family support and more single mothers.

Maybe, if you didn’t work you’d have the time to be a better homemaker and parent. Without a family, you’d have more time to focus on your career. If you had neither, you could grow your own vegetables, pursue your hobbies, or spend the day at a spa and feel sexy by evening.

A solution is to accept this reality. Whatever you work at, you will improve and excel in it. Examine your priorities, and take responsibility for your choices. Commitment to a goal may require hard work, but that’s an option. Changing your perspective and consciously choosing your lifestyle will lift a huge weight of guilt.

You may decide not to change anything, but then accept that you’ve elected to divide your time as you do in order to accommodate your different roles and the needs or yourself and family, because they are important to you. If you later criticize yourself for what you’re not doing or not doing well enough, remind yourself that you’ve chosen to compromise and do less at one thing to make time for something else as well.

Notice if you criticize yourself no matter what you do. If you devote more time to your work, you criticize your mothering. But if you devote more time to your children, you may believe you’re not doing enough to succeed professionally. Rather than feel trapped, realize that this is the consequence of having unrealistic expectations and the dirty work of your inner critic — You’re damned if you do, and damned if you don’t. This realization is liberating and can free you from self-blame.

Another tactic in combating your critic is becoming more self-aware. Self-criticism is pernicious, because it leads a stealth life, remaining concealed from consciousness most of the time. It’s a psychological axiom that our unconscious controls us. Hence, the more conscious we become of our negative self-talk, the more power we have to rein it in.

Here are some suggestions to shine a spotlight on the critic to chase it out of hiding:

1. Sit quietly and notice your thoughts. You might hear yourself saying you can’t. You’re not good at it. Listen to that string of putdowns!

2. If you talk to yourself using “should,” “always,” or “never,” your critic is probably at work.

3. Make a list of all the things you don’t like about yourself in each area of your life. Complete the sentence, “I don’t like myself when I…”

4. Watch out for criticisms as they pop up during the day, and add to the list.

5. Look in the mirror and assess what features you like, those that are neutral, and those you dislike.

6. If you’re feeling bored, frustrated, down, or having other uncomfortable emotions, they may be a symptom of negative thinking. Trace back to what event preceded them, and what thoughts you had about it and about yourself.

7. Notice the voice of your critic – the tone, volume, and words. Do they remind you of someone who has spoken to you that way in the past? Young children easily emulate the words and tone of their parents and internalize those voices.

Do the exercises in 10 Steps to Self-Esteem: The Ultimate Guide to Stop Self-Criticism. Get the webinar: How to Raise Your Self-Esteem.

Self-judgment is global when you find fault with your character, personality, and nearly everything you do. In that case, you’re dealing with deep-rooted shame. The antidote is self-acceptance based on self-compassion. Follow the steps in Conquering Shame and Codependency: 8 Steps to Freeing the True You.