The Power of the Seven Chakras 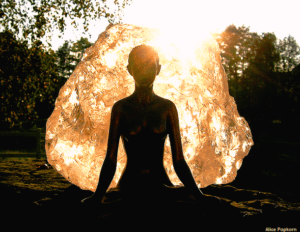 Awakening the seven chakras stimulates the creative life force that sleeps within each of us. Like a coiled serpent, waiting to be unleashed to evolve humankind to the next level. Ancient Tantric practices ignite this energy, called kundalini, using the body, breath, sound, and visualizations to speed its journey to God-realization, not over many lifetimes, but potentially in your lifetime. People have three bodies: the physical body and its consciousness; the astral or subtle body, experienced as feelings and emotions; and the causal body, expressed as intelligence and wisdom.

The seven chakras act as energy transformers for the three body/minds, each governing different functions. As each of the chakras is activated, the body/mind is purified, matter is spiritualized, and your consciousness is expanded. Gradually, energy moves from darkness, the negative pole, to light, the positive pole, and full consciousness at the seventh chakra. The process has been compared to psychoanalysis. Recovery is also a process of transformation that opens the chakras and brings us into soul-alignment.

Muladhara chakra, at the coccyx, is a negative pole. At this level, you are wedded to establishment values. Security and self-preservation are predominant themes. Primitive energies, such as fright, fight, freeze, fawn, and flight are prevalent responses to being attacked or injured physically or psychologically. You experience intense global anxiety threatening annihilation. This chakra is related to paranoia, addiction, and extreme pathology, which may cause aggressiveness toward others. In the average person, such fears are more latent, but may nonetheless affect your life. Where these impulses are disowned, they are projected onto others as being hurtful. Growth begins as these fears become conscious, integrated, and transmuted. When unconscious impulses or memories are brought into conscious awareness, more energy is made available for higher functioning. When the sleeping serpent gradually awakes and rises up, you may begin to feel sensations of floating, bliss, and tingling and warmth at the base of the spine. Clairvoyance or clairaudience may appear.

The second, Svadhisthana, is below the naval in the sacral nerve plexus above the genitals. Your senses and nervous system become more sensitive affecting you physically and emotionally. The focus is more on sexual and sensual pleasures, rather than defensive self-protection. Hence, there is greater interaction with others, albeit as sexual objects, and a wider range of emotion, although you are still controlled by unconscious impulses and appetites. These procreative energies are very powerful, and if not expressed, sublimated, or directed upwards, they can be physically and mentally very uncomfortable. Meditation and Tantric sexual practices provide methods for channeling the kundalini to higher centers.

This chakra is considered the seat of the unconscious, and once opened, you may be flooded by powerful emotions, often conflicting. All of your past conditioning and patterns are revealed and acted out, and, if not analyzed or worked through with increasing consciousness, the kundalini will descend. Higher transpersonal levels of consciousness can only be attained after your personal subconscious has been successfully explored and integrated. There are warnings that unless you have sufficient ego strength, character, and faith in God, that the energies unleashed can cause great harm to the individual, from inappropriate romantic or sexual attachments to a mental breakdown. Knowledge of the astral body and increased power of intuition are aroused at this chakra. Often prophetic dreams and spontaneous telepathic experiences may occur.

The third, Manipura, is near the solar plexus. Issues here revolve around control and power and the necessity to provide for your personal needs in the world. The challenge is to assert yourself effectively in the world without controlling, dominating or submitting to others. When Manipura awakens, you become aware of your soul, gain some control over emotions, and thereby begin to exercise influence beyond your own karma. Certain traditions consider this the beginning of spiritual evolution, because of the tendency for kundalini to descend if you have not survived the challenges of the second chakra. Here you may also experience digestive problems as the body is being purified. There are greater ESP abilities without ego involvement.

The fourth, Anahata or heart chakra, is midway between the nipples. When Anahata is fully awakened, you are detached from your emotions and have transcended karma. Feelings are less contaminated by needs and addictions. You are aware of your emotions and karmic patterns, but can exercise free will to fulfill your wishes. Now the soul can more fully guide your choices and actions. Having tamed basic survival instincts and needs (at the first three chakras), there is energy available to focus on self-realization. Hence, this chakra is considered the intersection between the earthly and the divine, as well as the left (yin) and right (yang). This is represented by the symbol of the cross and also the six-pointed star comprising two triangles, you pointing up and you pointing down. Your consciousness is increasingly in the spiritual rather than in the physical world.

With the heart opening, you often feel stabbing pains in the heart area. Eventually, this is accompanied by a surrender of the ego’s struggle for control, and a willingness to be guided more and more by the soul. In the Jungian sense, there are greater balance and relatedness between the ego and the self. As a result, there is less inner conflict and more harmony between you and others, as well as less projection and splitting of good and bad. As you become more integrated and whole, there is less attachment to and demand on others, and greater caring, responsiveness and respect for others. You are able to give, without a need to receive or manipulate others for personal gratification. An optimistic attitude toward life develops, and this is considered essential to maintaining kundalini’s evolution. Psychokinetic and healing powers arise, and synchronicity and wish-fulfillment begin to occur.

The fifth, Vishuddhi, is at the throat and thyroid gland. Vishuddhi is associated with soulful expression and creativity. This requires the ability to set aside the ego and allow the higher self or creative intelligence to be expressed verbally and artistically. Similarly, the throat chakra regulates the ability to receive nurturing from others and from the divine. Gradually you achieve a sense of trust and security, knowing that unlimited sustenance emanates from an inner transpersonal source. In contacting the unknown and trusting spirit to rise up and create, you nurture yourself in the act of creating. You begin to function in the world with greater detachment, connected increasingly to the spiritual realm. It is also said that this center regulates our sense of time and space, whether we experience time as moving slowly or quickly, influencing the rhythm of our life. Hearing may sharpen, and eventually, telepathic powers develop.

The sixth chakra, Ajna, is between the eyebrows near the pineal and pituitary glands. The pineal gland is associated with sight and light. When this chakra is activated, you may see light around the forehead. Insight and intuition are heightened. You are able to contact your higher wisdom or inner guru. The inner vision attained takes you beyond the physical dimension and beyond the limitation of time, space and causality. You feel connected to nature and the whole universe. This wisdom represents a coming together of two kinds of knowledge, the intellectual and feeling. The two left and right, feminine and masculine nadis or channels, join at the Ajna chakra, symbolized by the caduceus.

The seventh, Sahasrara, is the “soft spot” at the top of the head, the positive pole. When kundalini activates this chakra, the Gate of Brahman open and divine energy enters, symbolized by the crown, halo or light. At first, you experience headaches and brief moments of samadhi; this further activates all of the other chakras. With practice, the duration and effects increase. When fully active, duality disappears, and you attain cosmic consciousness, samadi or enlightenment.

God is experienced as a state of being; there are no longer unconscious feelings or thoughts, nor separation between self and the perception of feeling or thought. You become pure consciousness, bliss, and have a profound understanding of self and the true nature of all things and all dimensions. Sahasrara gradually closes after spirit enters at birth, and then reopens for it to exit at death. The astral body is then able to leave the physical, traveling into other bodies and dimensions, and in rare cases, adepts can prepare for their time of death when their consciousness will leave their body permanently. Orthodox Jews wear a skull cap to protect this area, while some monks shave in order to leave it exposed.

The order that the chakras awaken varies with each person’s karma and nature. It is important that you study with an experienced teacher and not try to hasten the process, for many suffer physically and mentally from this powerful force, unable to live a normal life, and never experience the anticipated benefits.

Get the Soul-Alignment Meditation to help you on your journey.

The Power of the Seven Chakras by Darlene Lancer, MFT, a Licensed Marriage and Family Therapist in Santa Monica, CA, and author of Codependency for Dummies