Secrets and Lies: The Damage of Deception and Relationship Betrayal 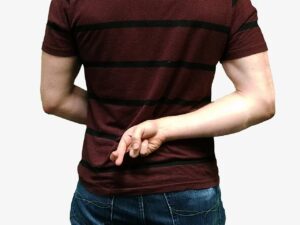 Trust is fragile. Secrets and lies jeopardize trust and can damage us and our relationships – sometimes irreparably.

We all tell “white lies.” We say “I’m fine,” when we’re not, praise unwanted gifts, or even fib, “The check is in the mail.” But in intimate relationships, emotional honesty includes allowing our partner to know us.

Honesty is more than simply not lying. Deception includes making ambiguous or vague statements, telling half-truths, manipulating information through emphasis, exaggeration, or minimization, and withholding information or feelings that are important to someone who has a “right to know” because it affects the relationship and that person’s free choice. Although we may consider ourselves honest, few of us reveal all our negative thoughts and feelings about people we are close to. It requires the courage to be vulnerable and authentic.

Harm Caused by Secrets and Lies

Most people who lie worry about the risks of being honest, but give little thought to the risks of dishonesty. Some of the ways in which lies and secrets cause harm are:

Opinions vary on how much “truth” others need to know. In some cultures, there’s a tacit understanding that infidelity is expected – as long as the adulterer is discreet. Mores change over time, so that homosexuality and transsexuality, once taboos, are more openly accepted and discussed.  Similarly, the fact of adoption and information about the birth parents were once kept secret or only revealed when the child was older. Such jarring revelations often were traumatic, yet also explained confusing anomalies in the child’s mind. Today, it’s recommended that toddlers be told, and some families opt for open adoptions, where the birth mother is involved more or less in the child’s life.

We have a right to information about our heritage, particularly for medical reasons. Secrets about things such as addiction, criminality, and mental illness lead to chronic shame and family dysfunction. Children already “know” something’s wrong, but denial undermines their self-trust and reality testing.

In a sexual relationship, we have a right to know our partner’s intentions and fidelity for emotional as well as health reasons. Often faithful partners rationalize or deny this need and their vulnerability to their emotional detriment. By not asking questions or expressing their needs, they enable and collude in deception for the same reason that the betrayer is dishonest or secretive – to not rock the boat and jeopardize the relationship. When there’s been betrayal, even if the couple stays together, seeds of distrust linger and sometimes poison the relationship.

On the other hand, we also have a right to privacy. Even in the most intimate relationship, disclosure of conversations with our therapist, close friends, and relatives in my opinion, should be discretionary.

When the truth comes out, often it‘s enlightening. It can help the other person make sense of previously unexplained or confusing behavior. At the same time, it can be devastating and traumatic to discover that the one we loved and trust has betrayed us. It can shatter the image we have of our partner as well as our confidence in ourselves and even reality itself. Unfortunately, frequently victims of betrayal blame themselves. Although it may be fruitful to examine our behavior in order to learn from it, we’re never responsible for someone else’s actions or omissions. If the relationship wasn’t working, both partners have a responsibility to speak up and address problems.

Aggrieved partners begin to review details of prior events and conversations, examining for overlooked clues and evidence of lies. There’s a natural desire to seek explanations and to know more facts. They may painfully conclude that they and their partner have been living in two very different realities, which they once believed were shared. Even if the relationship survives, it’s a loss when trust is broken. (See “Rebuilding Trust.”) As with all losses, our first reaction is denial, if not of the facts, then the severity of the impact. It may take time to accept the truth. Each of us will attribute a different meaning to the facts in order to heal and make peace with ourselves, our loved ones, and a disordered reality we once thought was safe and predictable.

When, and How to Reveal

What, when, why, and how we disclose are all essential factors. The timing, impact, and our motives should be carefully considered. The Ninth Step in Twelve Step Programs suggests making amends to people we’ve harmed, “except when to do so would injure them or others.”(See Spiritual Transformation in the Twelve Steps.) Full disclosure may be necessary to rebuild a broken marriage. Research shows that half-truths can leave you feeling even worse. (“Total Regret,” by Kelly Dickerson, Psychology Today, May, 2014.)

Studies also show that people who have good self-esteem and a positive opinion of their partner are more likely to forgive him or her. See “The Challenge of Forgiveness.”  However, what are the compelling reasons to reveal an affair that’s long over or a current one that we have no intention of ending? In the first case, is it to deepen mutual intimacy, or in the latter, to avoid it or provoke a divorce that we’re afraid to initiate? Disclosing our dissatisfaction in the relationship might be the necessary conversation that if communicated earlier would have prevented the affair.

For everyone involved, the pain of secrecy compounds the pain over the initial event, and the longer deception continues, the more damaging it is to self-esteem. Ideally, before revealing the truth to the person we’ve lied to, it’s helpful to have accepted our mistakes; otherwise, our shame and guilt can be obstacles to genuine empathy for the person we’ve harmed. First talk to someone nonjudgmental, whom you trust, or seek counseling. If we’ve forgiven ourselves, we’re in a better position to answer questions and face anger and hurt feelings that we’ve caused. To heal from guilt, see Freedom from Guilt and Blame – Finding Self-Forgiveness.

Each case of betrayal is unique. The potential damage and complications that surround lying as well as disclosure are things to consider when telling lies and keeping secrets. Contemplation in advance about the consequences of our actions to ourselves, our loved ones, and our relationships requires a degree of self-awareness, but can prevent unnecessary suffering. For more information on affairs, see www.dearpeggy.com. Constant pathological lying is different. Watch out for those signs.

My daughter feels guilty being friends with her dad’s new wife, knowing that this woman brought me so much pain. How can I help my daughter resolve her guilt?

Reassure your daughter than you can take care of your own feelings. Don’t speak negatively about your ex or his new wife. Remind your daughter that you two are separate. She can like friends and activities that you don’t like and vice versa. This will help alleviate enmeshment and her feeling responsible for your feelings. It will help her to individuate into a whole person.

Do I need to read “Freedom from Guilt and Blame – Finding Self-Forgiveness” now? Or am I healed already.

If you’re feeling guilty, that book would be helpful.