Do’s and Don’ts in Confronting Abuse 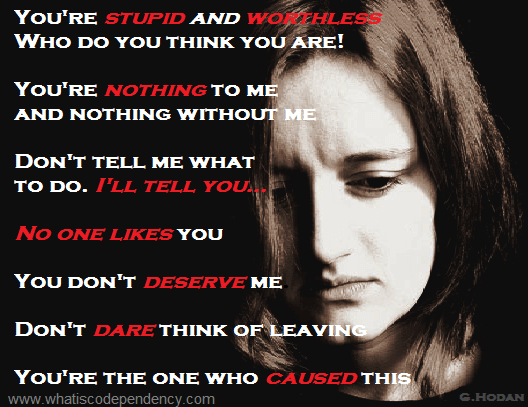 Abuse is about having power over someone. Abusers typically want to feel superior and to control and dominate. To them, communication is not about understanding. It’s a win-lose game. They use verbal abuse and/or violence to accomplish this. They’re frequently self-centered, impatient, unreasonable, insensitive, unforgiving, lack empathy, and are often jealous, suspicious, and withholding.

Their moods can shift from fun-loving and romantic to sullen and angry. Some punish with anger, others with silence–or both. It’s often “their way or the highway.” They can be bullies. Typically, abusers deny any responsibility and shift blame to their loved ones and co-workers. The one thing they all have in common is that their motive is to have the upper hand. This is because they don’t feel that they have personal power, regardless of worldly success. Often, they behave the way they were treated growing up, and their insecurity, shame, and rage from childhood drive them.

Allowing abuse damages our self-esteem. To respond effectively requires support. It’s difficult to face it without others who will validate our reality. This is especially true if we’ve been abused for any length of time. Without outside support, our compromised self-esteem leads to self-doubt, insecurity, isolation, and increased dependency on the abuser.

It’s important to understand the motives and mindset of an abuser; otherwise, victims of abuse commonly make the following mistakes that contribute to more abuse.

Effective Strategies for Dealing with Abuse

There are effective ways to deal with abuse, although they aren’t our gut reactions. They require education and forethought. Here are positive steps you can take.

Find specific strategies, steps, and scripts in my book, Dating, Loving, and Leaving a Narcissist: Essential Tools for Improving or Leaving Narcissistic and Abusive Relationships.

Abuse affects the lives of victims and damages their self-esteem. Thanks for sharing effective strategies when dealing with abuse. It is also important to consult a psychologist to help you in managing your problems.

You are correct. I was a defenseless child who was abused by my older brother after my father passed away. My mom really didnt want me or my sister, and she favored my brother more. The abuse would start when she was at work. I would tell her what my brother did and she could’ve cared less. I left home at 18 and never looked back! She and my brother have serious health problems now. God knows and sees everything, esp when you hurt one of His children!

Do see my blog “Sibling Abuse: The Hidden Epidemic.” If it left scars on your self-esteem, see Conquering Shame and Codependency.

I have been concerned for a neighbor who lives in an apartment very close to mine. This nice man, (John), has a wife who appears to scream loudly at him late at night. This wife recently gave birth to a baby, and has two older children a boy and a girl about 5 and 7 years old. I have also heard her yelling loudly at her 5 year old son whenever he does something that does not please her. Late one night recently, my husband heard her yelling at her husband, and the baby was crying loudly. This woman appears to yell and scream whenever she wants her way. She is very insulting to her husband as well as her children.

If you are concerned for the safety of a child, you can contact your local department of children or social services and they may make an investigatory house call. Realize, however, that there may be little that they are likely to do unless there is physical violence. If you’re friends with John and he opens up to you, you can suggest CoDA and counseling.

It’s impossible to escape abusers if you are a child. You are captive in the home environment where this behaviour is the norm, and you are taught that it is the norm. The damage is done by the time you’re old enough to leave home.

There is always someone else to swoop in and exploit the channels of abuse that the original abuser set up.

And we are, as the other commentor on here has stated, abused by employers, governments, systems. You are either an abuser or the abused.

In this country, we have to bear sometimes psychological abuse if you want to reach your económical goals. No body lives from Love, sadly it is a reality