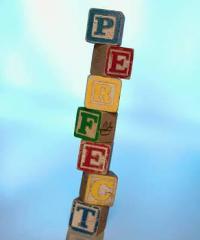 Perfectionism is an addiction, meaning we’re repeatedly unable to stop our perfectionist behaviors. It harms our self-esteem, makes us unable to accept other people’s differences and their mistakes and flaws. It can rob us of time with friends and family. We require that things look or are done in a specific, “correct” way in accordance with our perfectionist standards.

Perfection is an illusion existing only in the mind. Telling perfectionists they look beautiful or that their home or project is excellent is useless. Their image of how things should be bears little correlation to reality. They will continue to find flaws and have difficulty find pleasure in compliments or satisfaction from their efforts.

Perfectionists expect what is humanly impossible. Hence, they don’t accept themselves or their own humanity. Self-acceptance is a foreign concept. The thought of being average is horrifying and would mean being inferior, what they fear, but also what they actually believe. They never feel good enough and live with a harsh inner judge that tyrannizes them with how they should act, what they should have done differently or should be doing that they’re not. They’re sensitive to criticism, because it mirrors the doubts perfectionists have about themselves and their work. A negative reaction from someone overshadows positive feedback they receive.

Dreading criticism, perfectionists fear exposing mistakes or a sloppy or inferior performance or appearance. This stems from underlying shame – not feeling good enough as a person in some way, such as looks, character, physical prowess, or intelligence. They unconsciously imagine that achieving perfection would make them feel worthwhile. This compensates for deep-seated shame about which they’re generally unaware.

Several decades ago, the plaster of my living room wall had to be patched due to earthquake damage. (In California, this is not uncommon.) The plasterer did his best to match the rest of the wall, but the original plaster had a variegated, mottled texture, and the new plaster didn’t match. Probably no one else would have noticed, but I did. It wasn’t perfect, and I was frustrated. It occurred to me that my fixation on the plaster symbolized my concerns about exposing my own imperfections. Once I realized this, I was able to let it go.

Perfectionism is a Painful Trap

Because perfection is relative and an illusion, perfectionists are always chasing it. Hence, a perfectionist is continually failing and unable to enjoy the results of their efforts. When success is achieved, the pride of accomplishment is only fleetingly enjoyed, if at all, because there is always a flaw or higher bar to surpass. For example gratification from receiving an “A” on a test can be spoiled if they made even one mistake or a teacher’s comments were anything but complimentary.

Upon winning the highly coveted Oscar for Best Actor in 2014, Matthew McConaughey aptly described his perfectionism as always chasing his future self, knowing he’ll never catch up. He proudly declared, “My hero is always 10 years away . . .  to keep on chasing.” In actuality, perfectionists are constantly running away from their inner critic, and the pursuit of their imaginary ideal provides ongoing ammunition for self-criticism. This is the perfectionists’ trap. Their defensive solution to shame creates more of it.

The Cause of Perfectionism

The seeds of shame and perfectionism lie in childhood and often accompany codependency. Parents who are overcorrecting, controlling, abusive, punitive, or unpredictable can create insecurity and doubt in their children. Children imagine that if they perform flawlessly or are perfectly good, they will be accepted or that their parents won’t argue, that Mommy will be happy or Daddy won’t drink. Other parents encourage perfectionism by pressuring their children to perform, achieve unrealistic goals, or only approve of them based upon their performance. Even bright children, as well as perfectionist adults, quit or avoid learning new things to avoid feeling like a failure during the learning process when mistakes are unavoidable. Parents should empathize with their children’s sense of failure when they make mistakes.

As with any addiction, changing habits and compulsive behavior isn’t always so easy. But it’s entirely possible to have high standards and realistic goals without the compulsive, driven quality of perfectionism and without the destructive side effects, as well. Changing your style from maladaptive to an adaptive perfectionist can make a world of difference in your mood, motivation and productivity, and successful outcomes. Practice leaving things undone or messy, intentionally make mistakes, and challenge your cognitive distortions.

In “I’m Not Perfect – I’m Only Human”  I discuss these types in depth and associated symptoms, thoughts, and behaviors, along with detailed exercises to overcome perfectionism. Take a personality test, and get parenting tips to avoid passing on perfectionism. 10 Steps to Self-Esteem: The Ultimate Guide to Stop Self-Criticism as well as my webinar, How to Raise Your Self-Esteem provide simple steps to raise self-esteem and end self-criticism.

Thank you, you directed me to this blog from another of yours and I do agree with this one. My parents thought I was “gifted” and expectations come with that. I disagree with Matthew McConaughy in that I am constantly striving to match up to someone I (falsely) believe I USED to be not who I WILL be. I am extremely proud of who I was as a child and young teenager and believe I have since failed to live up to my potential & that my younger self would be disappointed in me. I realised just this week that my view of who I was is overly idealised and can’t be true…no kid is THAT cool…and who I am now is probably who I have always been.

Me too. A few of my parent’s comments and my reading of Jesus’ parable of the talents led me to get a PhD. However, the impossible academic job market and my emotional, social, and executive functioning weaknesses have put me at middle age incapable of getting of job and deeply ashamed of my life. I was in a gifted program throughout elementary school and they told us we would be the leaders of tomorrow. I skipped my senior year of high school to get on with academics. But no one ever taught me how to figure out what I want, how to live with hope, or how to confidently sell myself.

Apply your smarts to doing the exercises in my ebook How to Beat Perfectionism.

WOW!!! This is my everyday life. I had a father that was a perfectionist to his DNA matter..lol And I am following so nicely in his footsteps :/ Thank you for your wonderful articles!!!

Thanks for the article. It has been during my quest to conquer perfectionism and anxiety that I discovered I am a codependent! This is going to be a long road, but at least there’s a map on the way. Any idea on when the e-book on perfectionism will be out?

Thanks for the article. It has been during my quest to conquer perfectionism and anxiety that I discovered I am a codependent! This is going to be a long road, but at least there’s a map on the way. Any idea on when the e-book on perfectionism will be out?

It will be next year, since I’m writing another book now. Meanwhile work on the codependency and self-acceptance, and the perfectionism will fade away – at least that was my experience. My books both discuss perfectionism. Make mistakes intentionally for a week!

Well alright, alright, alright!!
Very excellent way of describing me!
I work very hard at trying to not be such a pain to myself, and it’s the hardest job I will ever have.
Thank you,
Jackie

Thanks Jackie. Chapter 9 of Codependency for Dummies addresses the perfectionist and pusher inside us and give some tips and exercises to tame them – along with the critic. My coming book on shame looks at the core issue and provides 8 healing steps.