Are You an Enabler and What You Can Do? 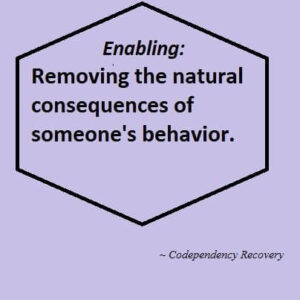 nabling is a term often used in the context of a relationship with an addict. It might be a drug addict (including alcoholics), a gambler, or a compulsive shopper.

But enabling is not limited to relationships involving addiction. What enablers have in common is that they take on someone else’s responsibilities and/or suffer the effects of that person’s behavior. Common examples are a woman looking for a job for her boyfriend, a man paying his girlfriend’s rent, or a parent meeting his child’s responsibilities that the child can do or should be doing.

Enabling “removes the natural consequences to the addict of his or her behavior.” In the case of addiction, the reason professionals warn against it is because evidence has shown that an addict experiencing the damaging consequences of his addiction on his life is the most powerful incentive to change. Often this is when the addict “hits bottom” – a term commonly referred to in Alcoholics Anonymous.

Enabling has implications for all codependents, because they generally sacrifice themselves to accommodate others’ needs, solve others’ problems,  and assume more than their share of responsibility at work and in relationships. They often feel compelled to be caretakers and solve other people’s problems. If they’re involved with addicts, particularly drug addicts, they usually end up taking on the responsibilities of the irresponsible addict. Their behavior starts as a well-intentioned desire help, but in later stages of addiction, they act out of desperation. The family dynamics become skewed so that the sober partner increasingly over-functions and the addict increasingly under-functions. This builds resentment on both sides, along with the addict’s expectation that the over-functioning partner will continue to make things right when the addict doesn’t meet his or her responsibilities.

The Al-Anon program suggests that you don’t do for the alcoholic what he or she is capable of doing. Yet, codependents feel guilty not helping someone, even when the person caused the situation and is capable of finding a solution. It’s even harder for codependents to say no to requests for help. The pressure to enable can be intense, particularly coming from suffering and/or angry addict, who generally uses manipulation to get his or her needs met. Examples of enabling include: giving money to an addict, gambler, or debtor, repairing common property the addict broke, lying to the addict’s employer to cover-up absenteeism, fulfilling the addict’s commitments to others, screening phone calls and making excuses for the addict, or bailing him or her out of jail.

Often addicts aren’t aware of their actions when intoxicated. They may have blackouts. It’s important to leave the evidence intact, so they see how their drug use is affecting their lives. Consequently, you shouldn’t clean up throw-up, wash soiled linens, or move a passed out addict into bed. This might sound cruel, but remember that the addict caused the problem. Because the addict is under the influence of an addiction, accusations, nagging, and blame are not only futile but unkind. All these inactions should be carried out in a matter-of-fact manner.

Stopping enabling isn’t easy. Nor is it for the faint of heart. Aside from likely pushback and possible retaliation, you may also fear the consequences of doing nothing. For instance, you may fear your husband will lose his job. Yet, losing a job is the greatest incentive to seeking sobriety. You may be afraid the addict will have an auto accident, or worse, die or commit suicide. Knowing a son is in jail is sometimes cold comfort to the mother who worries he may die on the streets. On the other hand, one recovered suicidal alcoholic said he wouldn’t be alive if his wife had rescued him one more time.

You may have to weigh the consequences of experiencing short-term pain vs. long-term misery, which postpones the addict’s reckoning with his or her own behavior. It requires great faith and courage not to enable, while not knowing the outcome. Although enabling can prolong the addiction, not all addicts recover, even despite counseling and going to many rehabs. This is why the 12 Steps are a spiritual program. They begin with the recognition that you’re powerless over the addict because the desire for sobriety must come from him or her.

To avoid unnecessarily suffering from the consequences of an addict’s drug use, it’s vital you begin to reclaim your sense of autonomy and take steps wherever possible to not allow the addict’s drug use to put you in jeopardy. Allowing the addict to drive you or your child while under the influence is life-threatening. On the other hand, taking on the role of the designated driver gives the addict a free license to use or drink. A spouse might refuse that enabling role by taking a separate car. If the addict is charged with DUI, it might be a wake-up call.

I always suggest you have a Plan B to cope with addicts’ unreliability; otherwise, you end up feeling like a victim. Sometimes, Plan B might be going to a 12-Step meeting or just staying home and finishing a novel. The important thing is that it’s a conscious choice so that you don’t feel manipulated or victimized.

It’s a good idea to follow through with plans, such as keeping counseling appointments and social engagements that the addict refuses to attend at the last minute. This precludes the addict’s attempt to manipulate the family. Having some recovery under his belt, one husband resolved to remain on vacation with the children when his addict wife suddenly decided to return home. He later remarked, “It was the first time in years that my mind was free of obsessing about her.”

In another situation, an alcoholic husband picked a fight an hour before guests were arriving for dinner. He threatened to leave unless they were uninvited. When his wife refused, he stormed out and hid in the bushes, while his wife enjoyed herself. Feeling ashamed, he never repeated that ploy.

Learn more about enabling in Codependency for Dummies. Becoming assertive and setting boundaries are often the first steps in stopping enabling. See my webinar How to Be Assertive and e-workbook How to Speak Your Mind – Become Assertive and Set Limits.

Listen to an interview I gave on enabling on my Media page.

Are You an Enabler and What You Can Do? by Darlene Lancer, MFT, a Licensed Marriage and Family Therapist in Santa Monica, CA, and author of Codependency for Dummies

What if person “A” is an addict (to codependence for example) and is trying to recover from the addiction, while person “B” is an enabler codependent. What is the best way person “A” could deal with person “B” while in recovery stages?

I would like to hear the enabling video please desperately

I would like to hear your interview on enabling!

Here it is: Interview on Enabling and my interview on “Helping Parents Find Peace.”