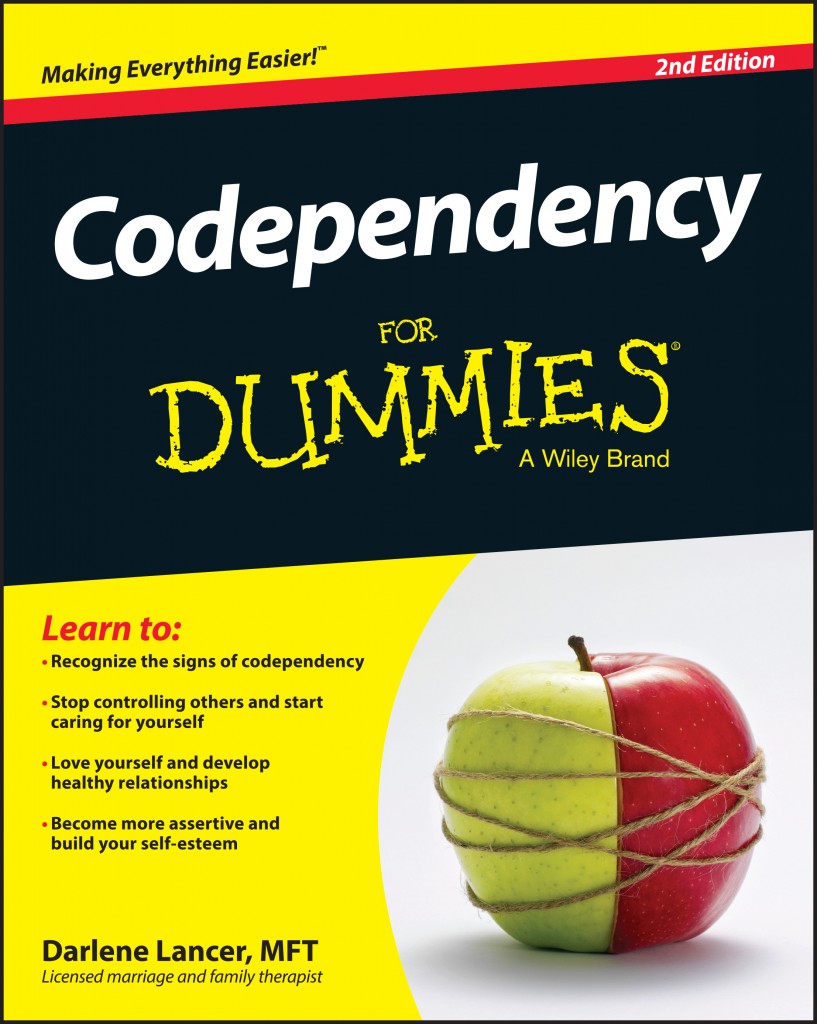 Do you wonder if you are Codependent?  Do you regularly sacrifice your opinions, needs or wants, and then feel resentful?   Do you feel guilty saying no and resentful when you don’t?  Are you controlled by or try to control someone else, whom your thoughts and feelings revolve around, like the Barry Manilow song, “I’m glad when you’re glad, sad when you’re sad?”  Are you afraid of speaking up?

Resentment, guilt, control, and fear are the hallmarks of codependency, a term once used only to describe the enabler of an alcoholic, is now more generally applied to unhealthy dependency.

Codependents live from the outside in, rather than from the inside out.

In Codependency for Dummies, I define a codependent as someone whose thinking and behavior revolve around another person, substance or process. (This includes addicts.) Codependents can’t access their innate true self that underlies their codependent self created in childhood. Read the Symptoms of Codependency.

The seeds of codependence are planted in dysfunctional families when a child experiences emotional abandonment. He or she learns to either rebel, withdraw from, or accommodate a parent who is controlling, selfish, depressed, addicted, or abusive.  Such children don’t get the sense that their wants or needs matter.  The family may be one of addiction or neglect, where children take on parental responsibilities and loose touch with themselves in the process.  On the other hand, a family may seem perfect.  The parents give their children the best of everything, but they expect perfection or adhere to rigid rules and beliefs, leaving no room for individuality and self-expression to flourish.

Codependents usually do all the giving in relationships.  Caring and helping others is fine, but if it’s at the expense of oneself, or if you don’t believe you have a choice – that it would be selfish not to or you’d risk losing the relationship – then caretaking is not just a behavior, it’s an identity and source of self-worth.  Alice has a big heart and a string of failed relationships.  When she likes a man, she gives more than she gets.  She helps her them with whatever their problem is.  The men take her for granted or feel smothered and eventually leave. Find out if you care too much – if you’re an enabler.

Codependents learn in childhood to attune to the needs and moods of a parent, so much so that they usually don’t know what they want or need.  Others’ needs, desires, and definitions of reality take precedence over their own.  Sometimes, they don’t even know what they think or feel and have difficulty describing themselves.  When asked, they shift to talking about family members or their job.

You get the picture.  Neither person will assert a position.  No one will take responsibility for a choice.  Maybe, one doesn’t want to dine out and rather watch a TV show, but doesn’t want to disappoint the other, or is ashamed to admit they can’t afford it.  Other times, neither knows what he or she wants.  Sometimes, an argument starts. These examples of small decisions escalate into major fights over big ones about money, sex, relatives, and the need for more closeness or freedom. Even a desire to leave is couched in language blaming each other, rather than verbalizing a decision. It’s impossible to problem-solve or compromise if you don’t take a position.  Issues and feelings are avoided, problems don’t get resolved, and resentment builds. Codependents need to learn How to Be Assertive.

Codependents frequently become preoccupied with another person.  Their thoughts, motives, and actions begin to revolve around someone else instead of their own feelings and goals.  Cindy was preoccupied with Nick’s health.  She oversaw his diet, managed the marketing, and gave him nutrition articles, oblivious to her own health problems. Read more about obsession.

Codependents may try to control others’ feelings and reactions with gifts or flattery, like “buttering up” to be loved, to get what they want, or to keep the peace.  They give with an expectation, and when it’s not fulfilled, they are not only hurt, but also resentful and feel owed.  Healthy giving is for the pure joy of it. Learn about control.

Because their boundaries weren’t respected as children, codependents don’t set functional limits with themselves and others.  They may be overly invested in someone else’s problem or work long hours on the job to the detriment of their family or themselves. They never say no.  They may have been taught that it’s selfish or “un-Christian” to assert their will, and don’t notice that someone else doesn’t mind using up their time and resources.

Jane was an accomplished landscape designer, but underbid her projects and spent many uncompensated hours with customers who gabbed away or changed their minds. She was always running behind and resented that she felt constantly pulled by her customers’ demands.  To her, charging more and setting boundaries was unthinkable.

In an organization, a codependent works harder for less and may become the “go-to” person who’ll take the unwanted assignments.  Another may be a martyr at home, never asking for help and never heeding his or her own needs for rest and rejuvenation. They get satisfaction in being needed and relied upon, but eventually at a price.  These codependents believe they won’t be valued if they don’t do extra work.  Underneath they fear losing a client, job, or relationship. Find out if you’re a “people-pleaser.”

Sometimes, one partner appears more needy and dependent, because he or she is possessive, jealous, calls frequently, or constantly seeks reassurance and attention.  However, the other partner is also codependent by allowing him or herself to be controlled by these unreasonable demands.

Low self-esteem is characteristic of codependence.  Childhood experiences and messages imprint feelings of being unlovable or unworthy.  Codependents are hard on themselves. They’re usually self-critical. They push and judge themselves, and often are high-achievers and perfectionists.  This sets them up to be in an abusive relationship or one where their needs are not met.  They’ll tolerate it even despite being attractive, smart, or successful at work, because underneath they believe they don’t deserve better. Take steps Stop Self-criticism and Raise Your Self-Esteem.

The first step in change is awareness.  Joining a group or 12-Step Program is effective, because it’s important to share, get feedback, and hear others’ struggles and successes.  Therapy or an assertiveness class can help you to identify your needs and feelings, and to try out new behavior.  It’s hard to change on your own, because it’s difficult to see outside your own mindset, and you’ll need support when risking new behaviors that create guilt and anxiety.  The risks are worth it.  You’re worth it.  Take back yourself!